Disney and Studio Ghibli are often compared when it comes to making really great animation. Both continue to push the envelope of what animation is and what it means to tell an animated story. However, both see progress in a different light and go about achieving it in contrasting ways.

While Walt did, at least during production, make a point of creating great stories, they rarely challenged the status quo. Indeed they fell back on, and relied upon, long established tales, fables and stories that Walt knew would resonate with audiences.

In addition to punching up the characters, Disney was also alert to technological advances that, while mostly being oblivious to the public, almost certainly gave him the edge over his competitors. Combined with the right talent, Disney hit on a winning formula and hasn’t really looked back since.

That, in a sense, sums up their approach to animated progress. Solid storytelling applied with a good dose of technological flair. Sure there was a bit of a malaise in the 70s and 80s, but the Little Mermaid helped pioneer the CAPS system and almost simultaneously, CGI began to be incorporated into Disney features in at least some capacity.

By extension, Pixar have the same mindset Their films, while exceptional have had a consistent and relentless technological drive behind them that shows no sign of slowing down. Think the point that was hammered home for Monsters Inc. about the rendering in Sully’s hair and you get the idea.

Coming right up to today, Frozen represents the latest step with a story that is as old as the hills, but created with technology that supposedly had the ability to make every snowflake unique. 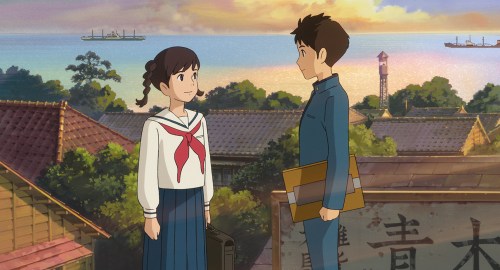 From Up On Poppy Hill

Often referred to the Walt Disney of Japan, Hayao Miyazaki and Studio Ghibli have taken a different track when it comes to animation progress. To some, it may seem bizarre; they do, after all, still use traditional paper. Disney abandoned that a decade a ago, how could that be considered progress?

Disney took the all-or-nothing approach to technology and animation. Ghibli on the other hand has instead decided to use technology to enhance traditional animation and to take advantage of the benefits computers offer without having them dictate the look of the film.

A Pixar film will immediately appear to have been made on a computer. But what about Spirited Away? You wouldn’t think that was a CGI film would you? Yet it was with approximately 99% of the film having a CGI component in it in one form or another.

What it boils down to is that Studio Ghibli focus on making exquisite films first and foremost and using stories to drive what they believe to be progress in animation. Technology is merely a background tool that assists them in the process in contrast to Disney who proudly proclaim how advanced their films are.

To that end, which approach is best? Would you rather see a film that is touted as being highly technical or one that has a great story and characters? I know which one I would plump for, what about you?

This article was written by Charles Kenny of The Animation Anomaly. Animation is a fascinating industry with a long and varied history that is steeped in the culture of many nations. Even so, it is quite uncommon for a civil engineer to take in interest in it, which is why Charles Kenny is considered the Animation Anomaly; he’s the only one! From Charles’ unique vantage point, The Animation Anomaly posts on a wide variety of animation topics that often include a visionary theme reflecting on the future of the industry and its place in the developing digital media world. see more.

The following excerpt is taken from Apple’s “Think Different” Campaign: “HERE’S TO THE CRAZY ONES — THE MISFITS, THE...
Read more
Editor's Pick

On December 21, electric vehicle maker Tesla will finally join the S&P 500, making it one of the 10 most-valuable companies on the index....
Read more
Editor's Pick

The following excerpt is taken from Apple’s “Think Different” Campaign: “HERE’S TO THE CRAZY ONES — THE MISFITS, THE...
Editor's Pick

Experts perform a valuable function in our modern world. Whenever we get into an argument, whether heated or as a diversion, it...
Read More
Editor's Pick

The 7 Key Principles of Platform Design

What is the best way to bring a knowledge framework to the world — in the open — to allow as much as possible teams, and individuals of...
Read More

This article has been contributed by Narayanan Shankar | Entrepreneur Insights Series It won’t be long before I drown...
Read more
Callum Connects

Having worked with some of the major tech collectors of personal data, Jay Pavagadhi decided to flip and launch a venture to...
Read more
Callum Connects

A background in marine biology led Benita Chick to a career raising awareness of Sustainable Development Goals whilst continuing her advocacy of...

A start in journalism led Anna Simpson to ask the question ‘What do we want for tomorrow?’ and from there she started...

Angeline Tong is a self-described ‘architect of narratives’ and for 15 years has been curating numerous experiential spaces and experiences for brands,...

Mechanical Engineer Kai Chua did not like being disturbed during the night to resolve breakdowns when the robots under-performed so he found...
Load more

Taking Healthcare To The Digital Age

Why You Shouldn’t Start A Startup

Sometimes we examine reasons as to why entrepreneurship is the path to be, but sometimes, we should examine why it isn't.
Read more

Helping Individuals, Organizations, & Communities Thrive What's your story?Motivated by people who had “invested” effort into my life, to...
Read more

Market conditions are rarely optimal, competition is rarely incompetent, funding is rarely sufficient, but that is why business owners have so much impact. Entrepreneurs...
Read more
Editor's Pick

I’ve worked in a number of startups, and even started a few of my own, over the last 19 years. Everything from bootstrapped, idea...
Read more
Editor's Pick

Who Benefits from Digital Transformation

Yesterday, while speaking at the opening of a regional trade fair in Spain, I took the opportunity to once again repeat my message...
Read more
Editor's Pick

From Zero to Hero

Building great tech teams is a really tough challenge. A lot of engineers underestimate how hard it can be. But software is just the...
Read more
Editor's Pick

The online grocery wars are heating up and the stakes are far bigger than any battle between Amazon and Walmart. The real...
Read more
Entrepreneurship

Why are Food Delivery Startups so Messed Up?

The space of Food delivery (or food-tech, as the entrepreneurs describe) — at one time — managed to make the investors salivate at a rate that would have...
Read more
Editor's Pick

With start-up culture’s rise in popularity, insight and transparency around the conditions that produce successful innovations are talked about more than ever. One of...
Read more
Load more

As more and more countries go into lockdown to prevent the spread of coronavirus, concerns are mounting about how we’re going to...
Read More
Callum Connects

Robert Vanderwall helps people realise their potential in the workplace. What's your story? My story is about the never ending search for people to learn...
Read More
Callum Connects

Florian enjoys geeking out over electronics. His first business has seen him on the Forbes 30 under 30 in Asia! What's your story? I was born...
Read More
Entrepreneurship

This Is The Face Of Asia’s Cloud Teleco

Ambarish Gupta is the CEO and Founder of Gurgaon-based cloud telephony start-up Knowlarity Communications. A graduate in Computer Science from the Indian Institute of...
Read More
Media