Research on traits has many critics. One example that follows will illustrate that someone perceived as a leader may not be the most effective leader in the long run. Nevertheless, some companies will use traits or personality in making hiring or promotion decisions. 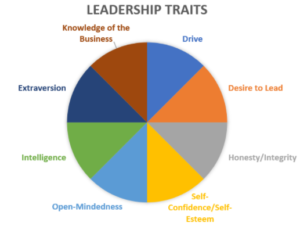 Leaders tend to be highly motivated individuals. This inner drive is reflected in a number of common ways. They reflect a greater effort level in general, they strive for achievement, they have greater ambition, they work with greater energy, they are often tenacious, and they are more likely to take the initiative rather than wait for someone else to do so.

Effective leaders also tend to have a strong desire toward leadership roles and functions. Although others are happier to allow others to take the lead, leaders want to do so themselves.

The moral aspect of leadership is highly significant. Effective leaders must demonstrate high levels of honesty and integrity. This is essential to inspiring confidence and trust from employees and other followers, without which a leader is not likely to be effective. Dishonesty may not always be revealed at first, but it usually is with time. There are many stories of business leaders who are successful for a period of time but later find themselves in serious trouble due to dishonest or unethical practices. For example, Martin Winterkorn became embroiled in ethical and legal controversy after a period of strong success as CEO of Volkswagen.

These two elements, self-esteem and self-confidence, are closely related and tend to be prominent in leaders. Perhaps it is best to view these traits in terms of the negative perspective. A lack of self-esteem and self-confidence is very problematic for a leader. When these traits are lacking, doubts arise and insecurities plague a leader’s activities. The leader tends to be confident that his beliefs, plans, and actions are correct (hopefully with good reason). This confidence is important in that it enables the leader to persist steadfastly in the right course even when there are obstacles and doubts from others.

At the same time, effective leaders also tend to be open-minded to new ideas and experiences. They recognize that innovation is often valuable, and they also tend to consider ideas and suggestions from others. Self-confidence and self-esteem do not have to conflict with this spirit of open-mindedness. When they do, the result is generally harmful.

One obvious trait that many people look for in leaders is intelligence. Studies have shown that this is indeed an important qualification. It has been suggested, however, that pure cognitive ability is a “threshold” qualification. That is, it is important for the entrance into leadership roles. However, once within the leadership circle, most individuals have relatively high intelligence levels, so mere cognitive ability is not enough to distinguish a leader from other leaders.

Further, pure cognitive ability is only one type of intelligence. Relational and emotional intelligence are also important aspects for leaders to develop. An over-reliance on strict cognitive intelligence can be very inhibiting to effective leadership. 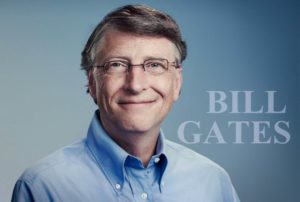 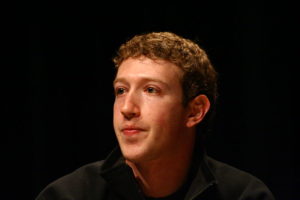 Another unsurprising personality trait that is commonly associated with leadership is being an extrovert. Leaders tend to be outgoing and social in their personalities, which helps them take the lead and act with initiative. It also helps them with the important aspect of connecting to and inspiring others through relationships.

Though many leaders are extraverts, there are certainly examples of successful leaders who are not. Sometimes other strengths are sufficient to compensate for not being an extravert, or sometimes a leader who is not naturally an extravert is able to train himself to be more outgoing in behavior when needed, though this still does not generally change the leader’s basic personality. Bill Gates of Microsoft and Mark Zuckerberg of Facebook are two prominent examples of extremely successful leaders who are introverts by personality.

Knowledge of the Business

Another key ingredient in the leadership trait mix is knowledge of the business. Even if an individual has all the natural personality traits desired of leaders, a lack of knowledge and experience is usually impossible to overcome. A leader must be competent in his field, and the most effective leaders are usually experts with deep insight.

Though a trait-based analysis of leaders is a common approach, another way to evaluate leaders is to analyze their behavioral leadership styles.

Task-centered styles of leadership focus on giving instructions and directions to group members to reach achievement and accomplishment goals more efficiently and effectively. The focus is on the objective analysis of what needs done and the specific course of actions that should be taken to meet those needs. Employees are seen as resources to be used to accomplish the goals.

Employee-centered styles of leadership focus less on objective actions or plans and more on building the relationships between themselves and their followers. By encouraging and supporting them, the leader hopes to make them more qualified, confident, and productive. His focus is on developing his employees and inspiring them to follow the vision he has provided. Employee-centered styles are also often referred to as people-centered or relationship-centered.

Of course, many leaders would hope to combine qualities from both of these styles, but the tendency is for individual leaders to focus more strongly on one or the other.

A leader’s style can often be identified by the manner in which he makes decisions, especially the degree to which he involves his employees. This aspect of leadership is often divided into a spectrum with three broad categories: autocratic, democratic, and laissez-faire.

An autocratic leader makes decisions without significant employee involvement in the process. He works from an authoritarian perspective. This approach often corresponds to a task-centered style. This approach can be faster and more efficient than more discursive approaches.

A democratic approach strongly involves the employee team in the decision-making process. This can take a variety of forms. For example, the employees may discuss the issue together as a group, followed by the leader making the final decision. Alternatively, the leader might agree to allow the employees a final vote in the matter. In any case, employees have a significant role to play in the process.

A laissez-faire approach is a very hands-off approach to leadership. Instead, employees make decisions on their own. This approach generally leads to lower productivity, but it may be the best where employees are experts or where creativity is needed. Previous story :Not All Glitters for the Diamond Industry: An Inside Look Next story :How to Spot Technology Trends & Make Them Happen

Rebecca (Bex) Aldridge combined her experience as a physiotherapist with her understanding as a new mother to set up Health2Mama to help new mums along their pre- and postnatal journey. What’s your story?I qualified as a physio in 2002 and after completing a Masters started a company specialising in physiotherapy at home, ‘Physiocomestoyou’, in London in […]
October 11, 2020October 26, 2020
Saving Bookmark this article Bookmarked

This Is The Face Of Asia’s Cloud Teleco

Ambarish Gupta is the CEO and Founder of Gurgaon-based cloud telephony start-up Knowlarity Communications. A graduate in Computer Science from the Indian Institute of Technology, Kanpur, Ambarish holds an MBA from Carnegie Mellon University, USA. He started off his career as a researcher for the Fraunhofer Institute for Computer Graphics in Germany before joining software […]
April 1, 2015May 2, 2015
Saving Bookmark this article Bookmarked

How Does Startup Funding Work?

Startup Funding is not as elusive as you may think it is. Put away the semantics of the VCs and Equity Firms and learn everything you needed to know about funding! china equity funding startup thailand Empirics Asia Member since September 16, 2014 Loading + Follow Following Our content is published by a team of […]
July 31, 2014November 9, 2014
Saving Bookmark this article Bookmarked

Recently, I got to talk to Muslim Zholdozbayev, co-founder of software and data engineering company Petrel AI. Leading engineering company in Kazakhstan. He shared his perspectives on a new business approach for outsource and tech companies. Here is what he shared: 1. New approach for outsource servicesAs technology is constantly evolving so is the client […]
September 18, 2020September 18, 2020
Saving Bookmark this article Bookmarked

In 2011, Abhijit started Graymatics and developed an artificial intelligence platform to leverage video data in various ways. What’s your story? I have been a long-time serial high-tech entrepreneur (started my first company over 17 years back) and a tech geek (have a PhD in Computer Engineering). I was studying in India and the United […]
August 10, 2018August 8, 2018
Saving Bookmark this article Bookmarked

Having an eye for high end things, after a long standing career in the luxury industry, Helene Denaiffe turned her hand to home decoration and set up Stylodeco, a fashionable online home and decor platform. Now she can run her own show in Singapore where she finds connecting with people and growing a business much […]
November 24, 2015November 23, 2015
Saving Bookmark this article Bookmarked

Financial disaster rarely comes about overnight. Even for those devastated by a sudden, tragic event, the foundation of their collapse lies in their daily habits and assumptions, and has been brewing for many years. Whether overcome by an unexpected experience, or living in a state of horrible financial neglect, many people are in full-blown denial […]
February 2, 2016February 2, 2016
Saving Bookmark this article Bookmarked

Through food creation, Natasha Chiam is positively affecting people’s lives. What’s your story? I grew up in Melbourne, Australia, where my family has lived for about 30 years. I trained as a lawyer, but a year after I was admitted to the profession in Australia I decided to move to journalism. I wrote about beauty […]
March 30, 2016March 29, 2016
Saving Bookmark this article Bookmarked
Next